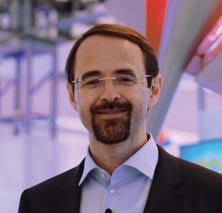 Alexander A Makarov, PhD is Director of Global Research Life Science, Mass Spectrometry (Thermo Fisher Scientific (TFS), Germany, Bremen) and inventor of the Orbitrap mass analyzer. He is also professor of High Resolution Mass Spectrometry at Utrecht University (Netherlands). He has extensive expertise in instrument development and his invention of the Orbitrap mass analyzer in late 90s, changed the field of modern mass spectrometry.

He studied physics at Moscow Physics-Engineering Institute (MPEI) (Russia) where he obtained his pre-doctoral (Physics) and PhD (Physics and mathematics). After defending his PhD thesis in 1992 and joining the General Physics Institute of Russian Academy of Sciences, he became a post-doc in Warwick University where he got involved in tandem mass spectrometry. In 1996, Alexander joined a small high-tech company, HD Technologies, Manchester, UK where he started the concept of the Orbitrap mass analyzer. Proof-of-principle results were presented at the ASMS Conference and the term “Orbitrap analyzer” was used for the first time in 1999. Following the acquisition of HD Technologies by Thermo Corporation in 2000, Alexander concentrated his research on interfacing the analyzer to continuous rather than pulsed ion sources with the practical goal of incorporating an electrospray ion source. This resulted in the commercial release of a new LTQ Orbitrap tandem mass spectrometer in 2005 to the enthusiastic acceptance of the mass spectrometry community, especially by proteomics and metabolomics researchers. At TFS, he has continued to provide scientific guidance on the LTQ Orbitrap family of instruments (XL- 2007, ETD- 2008 Velos- 2009, Velos Pro and Elite -2011), Exactive family (Classic-2008, Plus- 2012, EMR- 2013), iCAP family (Q-2012, TQ- 2017), Q Exactive family (Classic- 2011, Plus- 2013, Focus and HF- 2014, HF-X- 2017, UHMR- 2018), Orbitrap Fusion family (2013, Lumos- 2015).

Pursuing the strategic goal of bringing Orbitrap technology into new analytical applications previously inaccessible to mass spectrometry, Dr. Makarov continues to drive improvements of the technology. This is illustrated by the introduction of a new generation of Orbitrap analyzers and enhanced Fourier transform algorithms.